With years of trial experience and a commitment to justice, the Law Office of Mahmoud R, Rabah specializes in providing clients in Queens, Brooklyn, Staten Island, and elsewhere in New York City and Nassau County with legal representation like no other.

Holding a narrow scope and specific focus on the varying areas of criminal law, Mr. Rabah is able to provide you with his personal attention and commitment that goes unmatched by his competitors. Simply put, your legal dilemma becomes Mr. Rabah’s crusade. He remains a caring, committed and aggressive attorney when it comes to protecting his client’s futures and securing their rights.

The following are Mr. Rabah’s areas of practice:

CRIMINAL DEFENSE: If you or someone you know is facing criminal charges in Queens, Brooklyn, Staten Island or elsewhere in the New York City area, contact the Law Offices of Mahmoud Rabah today. As an experienced criminal defense attorney, Mr. Rabah won’t rest until your name is cleared of the crime and fight to ensure that your rights are protected along the way. Using his knowledge and expertise of criminal law, Mr. Rabah has litigated and fought in cases involving the following offenses:

SUMMONSES: Mahmoud Rabah can represent you in fighting summonses received by police. Often, you will not need to appear in court. Mr. Rabah can appear on your behalf and resolve the case without you setting foot in a courtroom.

INVESTIGATIONS: Mr. Rabah handles pre-arrest investigations and post arrest representation issues. He can work to protect your rights in any situation and can act as your shield against law enforcement.

IMMIGRATION: Mr. Rabah has an extensive network of attorneys that he works with who specialize in immigration, naturalization, and deportation issues.

“Mr. Rabah is an outstanding attorney! I called him and was able to meet with him same day for my case. He was very professional and was able to get my case dismissed quickly.” Stacy Ann,
June, 2013, as posted on Avvo.com. 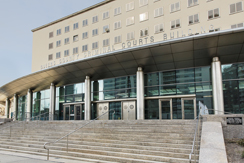